Soft-spoken and unassuming, Sumit from Asha’s Tigri slum community packs a punch on his frail shoulders. His academic scores from his secondary school to his college days are consistently high, and reveal the picture of a bright young boy determined to do well in his studies.

Sumit’s life has been one of constant struggle and complex challenges.

His family has five members: his grandmother, parents, and older sister. Sumit’s father is the only earning member in the family. He works as a local small time tailor, and his income is not consistent. He earns about Rs 200/- in a day. He lost all work during Covid, and has been experiencing unemployment distress since then. His sister studied till class 11 and dropped out of school thereafter. 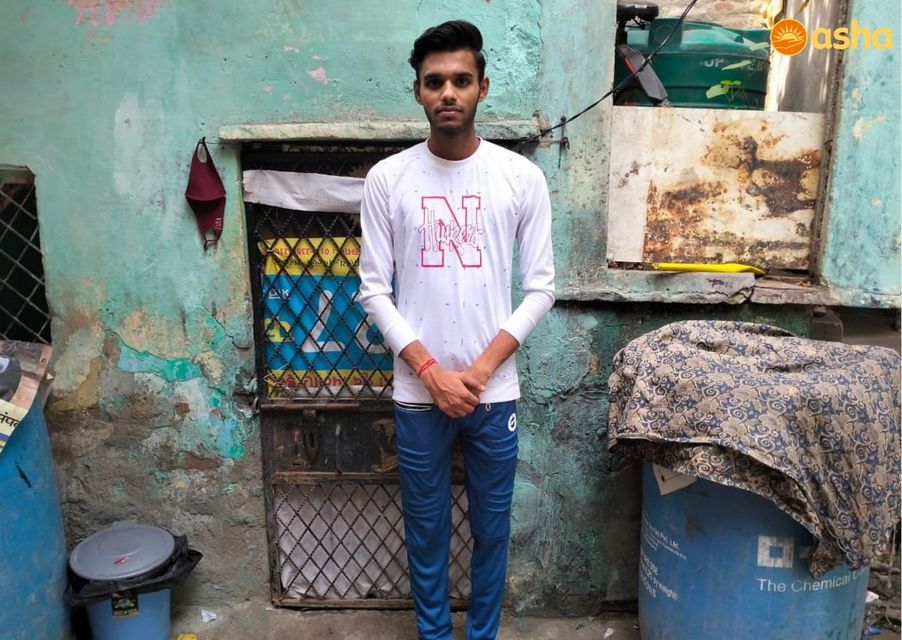 Sumit at his home

Their dwelling unit is a tiny room and a small adjoining space. The roof on top is temporary and very poorly constructed, and as a result, there is constant leakage of water, especially during the rainy season, washing away precious little belongings. The adjoining space has no cover on top and faces nature’s fury with strong winds, dust, hail storm, or other natural calamities.

Moreover, the house is situated at a lower level; as a result, groundwater as well as water from the nearby drain enters the house and fills the rooms. Living in such pathetic and unimaginable conditions, there is always the danger of infections and diseases. Sumit’s childhood was spent under such difficult situations, with a continuous struggle for existence. Sumit was a good student from his childhood, but the conditions and the surrounding environment made it very difficult for him to study. His family members occupied the room, and all the daily household activities were done, leaving no space for Sumit to study. The only time he could study was at night, after everybody went to sleep. He used a small battery operated light to study so that other family members were not disturbed. Water supply was another major problem in his locality. Every morning, there was a long queue for filling 2-3 buckets of water. There were also regular fights among the residents, especially during the summer months, on the issue of filling water.

There were other environmental challenges as well. Tigri is a crime-infested area with violence, street fights, and other law and order issues. A nearby liquor shop near his house was a regular source of quarrels and abuses, constantly vitiating the atmosphere. Sumit mentioned, ‘I found it very difficult to concentrate on my studies even at night, as there was constant noise, abusive language and other disturbances because of drunkards frequenting the liquor shop and creating problems.” Due to the hostile and dangerous environment, Sumit’s parents were over-protective of him, and he was only allowed to go to school and come back. Moreover, his parents did not allow him to mix up with the other children in his locality, as they feared that it would negatively influence their child. As a result, Sumit had very few friends and became a timid and reticent child, always confined in his shell.

Sumit came into contact with Asha when he was in his secondary school years. One of the student ambassadors at Tigri, Rekha, accompanied him to the Asha centre and introduced him to the Asha team. Although Sumit’s childhood medical interventions, including complete immunisation, were done at the Asha Centre in Tigri, he formally joined Asha after his class X examination. When he came to Asha for the first time, he was struck by the intensity and lively environment of the place. There were so many activities happening simultaneously, with the medical room treating patients, young children participating in fun-filled life skills and educational activities, college students continuing their studies with IT facilities, a library with rich resources and dedicated study spaces, as well as women participating in Mahila Mandal(Ladies Group) meetings and discussing community issues. Sumit liked the positivity in the environment and how everybody worked with a sense of purpose.

This became the turning point in Sumit’s life. He got the much needed enabling environment, which boosted his academic progress. Asha’s academic support, classes by senior student ambassadors, supplementary books and other resource materials and most importantly, helpful, committed and dedicated members of the Asha team helped Sumit build a solid foundation for the crucial class XII Board exams.

Further, until then, Sumit had very little interaction with the outside world because of the surrounding environment. At Asha, he made new friends with other students. This helped him to open up and share his problems. It also enabled him to develop his personality and gave him an identity.

Another crucial input provided by Asha in Sumit’s life was the teaching and practice of Asha values, which became his lifelong asset. Asha values like Gratitude, Affirmation, Compassion, Joy, Positivity, Non-Violence and others helped him sharpen his humanitarian qualities. They allowed him to curb the negative influences from his childhood experiences, become a better human being and a responsible member of society.

Sumit’s hard work and Asha’s continuous academic and infrastructural support helped him secure 94.75% in his school-leaving class XII boards . He performed the rare feat of scoring an incredible 100% in Economics!He also developed an interest in the subject and wanted to pursue higher studies in the same field. However, there was a new set of challenges in his life. His parents were very reluctant to let him allow higher education because of the financial constraints in the family. The adverse environment in their surroundings also influenced their decision as they thought that a university education might spoil their child. However, the Asha team and the student ambassadors regularly visited his house, counselled and convinced his parents about the benefit of a university education and how it would help him earn a better living and move out of poverty. Asha team also assured them that the financial expenses on Sumit’s education would be taken care of by Asha.

Sumit’s parents were finally convinced, and the door to Sumit’s university education was finally opened!

Asha’s team helped Sumit with the online application process for Delhi University. He secured admission to BA (Programme) with Economics and Political Science as the main subjects in the prestigious Delhi University’s PGDAV college. Asha paid his college fees and took care of other expenses to secure his admission. 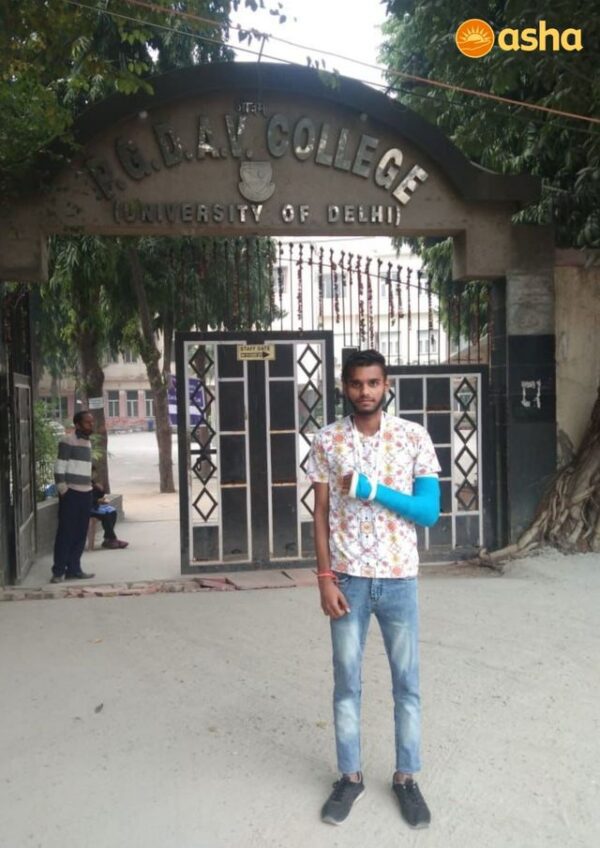 Outside his college at Delhi University

College education provided a different exposure and added a new dimension to Sumit’s personality. He mentions,” I made new friends from other states of India, which helped me learn about different cultures, customs and traditions and enriched my knowledge.” The Asha team regularly monitored his performance and ensured that Sumit performed well in all Semesters. He scored a GPA of 7.59 and 8.23 in his first and second year respectively, 9 in his IVth Semester and 8.27 in his Vth Semester.

Economics continues to be his favourite subject, and he wants to pursue a career in Economics. He has improved his English skills considerably by learning through YouTube videos and reading News on different App-based application platforms like in shorts. Sumit’s ability to analyze and quickly move up the Learning Curve is one of his great strengths.

Apart from being a good student, Sumit is a committed student ambassador and conducts classes for junior students in his area of expertise. He also teaches and practices Asha values with the students and loves to contribute his skills for the benefit of others. 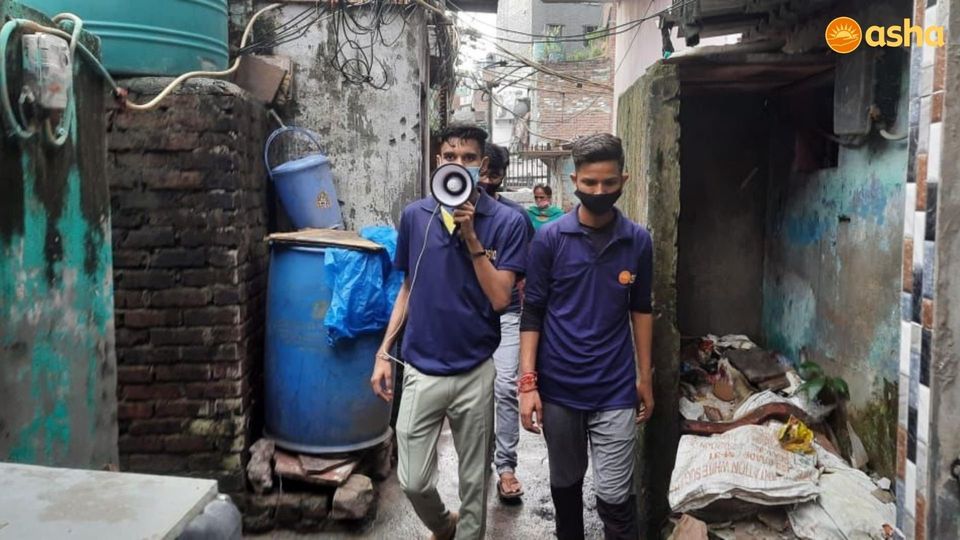 Working hard as an Asha Corona Warrior during Covid.

Sumit has also been a dedicated Asha Corona warrior since the pandemic and actively participated in Asha’s Response to Covid-19 spreading Awareness, educating the residents on covid appropriate behaviour, distribution of rations, and building immunity programmes, supporting the elderly, programmes and promoting vaccination drives. Asha has ensured that Sumit and other Corona warriors are vaccinated against Covid-19 with all three doses.

“Asha is an integral part of my existence and has changed my life’s direction forever. I want to Pay it Forward to my community in every way possible all my life,” says Sumit.

Chris and I are working to find a way to help him do his Masters in Australia. It will be a long journey, but Sumit is committed, as are we. Way to go Sumit!