Moving forward in life with a purpose

No child should witness his parent’s death, but unfortunately, Vivekanand did. 19-year-old Vivek (fondly called) resides in Anna Nagar slum community. When he was 13-year-old it was a normal day for Vivek, he came from school had his lunch and went to play outside with his friends. But after some time, people came informing him of an accident that had occurred at his house. 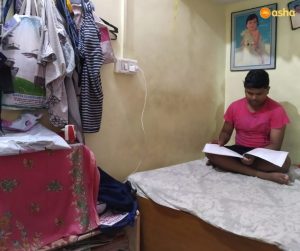 He ran back home and saw his house on fire and people running to throw water on his mother. The last memory that he had before fainting was his mother crying in pain for help. Unfortunately, his mother passed away in a government hospital after a few days. His father and elder brother were left alone now to take care of the family. Failing to cope up with this situation, Vivek’s father started drinking alcohol regularly and stopped working. All the responsibilities then fell on Vivek’s brother. It was not long when Vivek’s elder brother also ran away and young Vivek was left to take care of the home and his father. 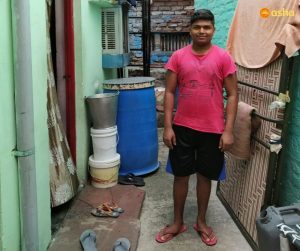 When Vivek was 16-years old his father also passed away due to liver Cirrhosis. It was in this hard time that Vivek’s uncle (father’s brother) came forward and adopted him and took Vivek to his home. Circumstances had made Vivek very depressed and an introvert. Ayush who was his uncle’s son used to visit Asha regularly. He informed the Asha team about Vivek and they immediately met Vivek and counselled and motivated him to visit the center regularly with his cousin. It was a turning point in Vivek’s life. He started visiting Asha every day and enrolled himself in computer classes he got involved in all the Asha activities. Vivek found a place to study. Last year Vivek completed his schooling and scored 75% of marks. The Asha team with the support of his uncle got him admitted to Desh Bandhu College, Delhi University. He is now presently pursuing liberal arts. Vivek is on his way to achieving his goal for a better life and we hope that he will be able to recover from the tragedies in his life.