Anil is a 33-year-old man who resides in the lanes of Dr Ambedkar Basti slum. He has a 2-bedroom house, where he lives with his wife and 3 children. Living in a slum is not easy, along with life’s trials and tribulations, there are numerous financial difficulties and sorrows that he has faced.
Anil was barely a teenager when he relocated to New Delhi from his village in Uttar Pradesh to help his father. He picked up odd jobs and started to earn some money to financially support his family. He soon got married and had children, he now had multiple responsibilities and mouths to feed.
With the passing years, Anil got a stable job working as a peon for a company. His job was difficult and tiring as he had to be on his feet whole day, going from one corner in the city to another to submit files. For this work, he started to earn a decent sum of 163 USD a month. As he was the single breadwinner, he had the burden of supporting 6 members of his family.

When the pandemic struck, like many slum dwellers Anil also lost his job for few months. At such a time, his mother was also diagnosed with lung cancer and her health started to deteriorate rapidly. Anil and his wife struggled to borrow money from distant relatives and neighbours for her treatment. However, by the time the lockdown was over, she had passed away.
Furthermore, when the second covid wave hit Delhi, there was panic everywhere and death all around. The disease started to spread fast from different localities in Delhi and finally reached the slums. Anil, was one of the unfortunate, who started to display the covid symptoms of high fever, dry cough and breathlessness. After a few days, he got tested and was diagnosed covid positive.

He visited the nearby Government clinic who just provided him with 10 days medicine and nothing more. Anil, isolated and started taking the medicines but his condition was not getting any better. He called the covid helpline multiple times but they could not provide further help. Hopeless and dejected, Anil now started to believe that he was not going to survive, he worried for his family. 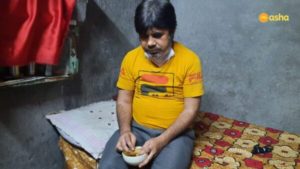 Meanwhile, the Asha team had started going door to door in every slum and were looking for patients with covid symptoms as well as covid positive patients to treat. During this surveillance, the Asha team in Dr Ambedkar Basti came across Anil. They realized that his case was highly urgent. The Asha nurse immediately visited him at home and started to nebulize him 2 times a day for the next few weeks. 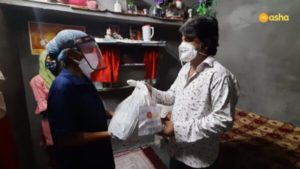 Asha’s intervention at the correct time was highly important, as just a few days delay could have brought Anil to the doors of death. Now with Asha’s home care treatment and free medicines, Anil started to recover very fast. Within just 2 days he was able to breathe much better. It took about another 2-3 weeks for Anil to completely recover and become healthy. 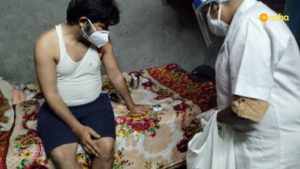 To help Anil’s family during such a terrible crisis, Asha also provided him with grocery kits every month. Asha also provided Anil with High protein laddoos to help improve his immunity and make him stronger. Anil believes that if it were not for Asha then he would have not survived during that time. He is immensely grateful to Asha for life.