Santosh-Set to conquer the world as a Computer Engineer

It was a proud moment for Asha when Santosh, the first boy from the slums of Delhi graduated from the prestigious Delhi Technical University (Formerly Delhi College of Engineering) in Computer Science Engineering. He has recently secured a job as a Technical Analyst in one of the world-renowned Multinational Banks through Campus Placement. Santosh has become a role model for thousands of young people from the slums of Delhi.

His life’s journey started in Asha’s Zakhira slum in some of the toughest conditions of extreme poverty and deprivation. His family included his parents and younger sibling and they lived in a tiny 25 sq feet one-room shanty. His father was a landless farmer in Bihar who migrated to Delhi in search of a better livelihood. In Delhi, he became a daily wage labourer and earned 100 US$ per month. His mother worked as an assistant at a nearby Government Centre for Nutrition of Children, with no fixed remuneration. “Our shanty was made of wood logs, steel parts, discarded materials and never had a roof, but was covered with a thin plastic sheet. During the rainy season, the water from the roof always seeped in, washing away all our belongings,” mentioned Santosh. 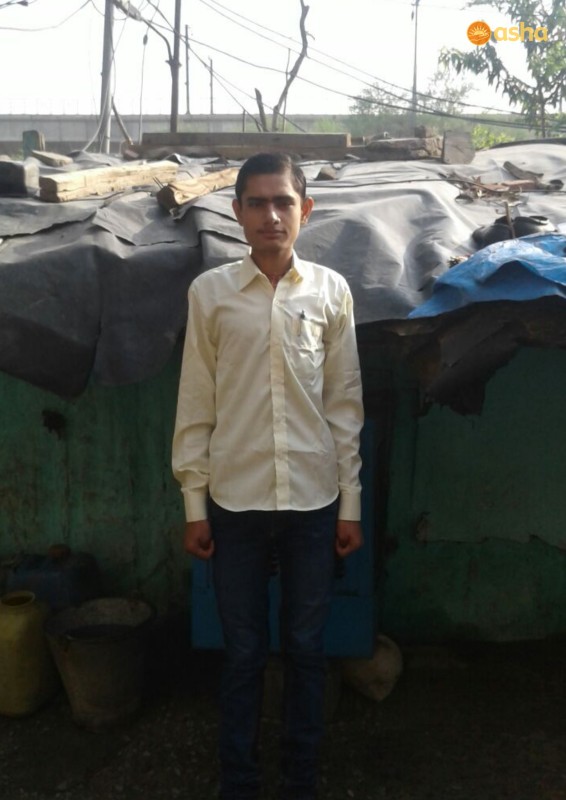 Santosh’s journey with Asha began when he was just two years of age. He began visiting the Asha centre at Zakhira with his mother who would bring him for check ups and immunisations at Asha’s Well baby clinic. When he was six years of age, Santosh became an active member of Asha’s Bal Mandal (Children’s Group). “My inclination to be a part of Asha’s Children’s Group grew when I saw volunteers from all over the world visiting our centre and teaching in a fun and creative way. Also, there were so many computers at our centre, and this attracted me the most. My love for computers began there. This ultimately became my life’s calling,” said Santosh.

Santosh shared that it was always difficult to find time and space to study in an environment characterized by dilapidated roofs, poorly ventilated overcrowded rooms, trains passing by after every few minutes, lack of basic sanitation facilities, and so many distracting activities happening here and there. The Asha centre with all the facilities like proper study spaces, computers with internet connectivity and books created not only an enabling environment, but helped me develop interest and focus on my academics.

Asha’s committed and dedicated team always took care of me and other children as their own family. I learnt the Asha values which have played a crucial role in my journey. They have helped me become a responsible citizen and remove all the negative influences in the environment. My parents were not educated and our financial situation was also not good at home. At every crucial juncture of my life, Dr Kiran helped me morally, emotionally and financially. Asha became my second home, a getaway from all the distress and suffering, and constructed the path of progress and development.”

Santosh’s mother was also a member of Asha’s Mahila Mandal (Women’s Group). This led to her empowerment and also contributed greatly to his development.

Sharing an experience, Santosh said, “When I entered high school, it was the most difficult period for me. Though I got an opportunity to study my favourite subjects, the medium of instruction was in English, whereas till class 10th, I had studied in the Hindi medium. I had to sit with a dictionary to understand what was written in the books or comprehend what was taught by my teachers.” 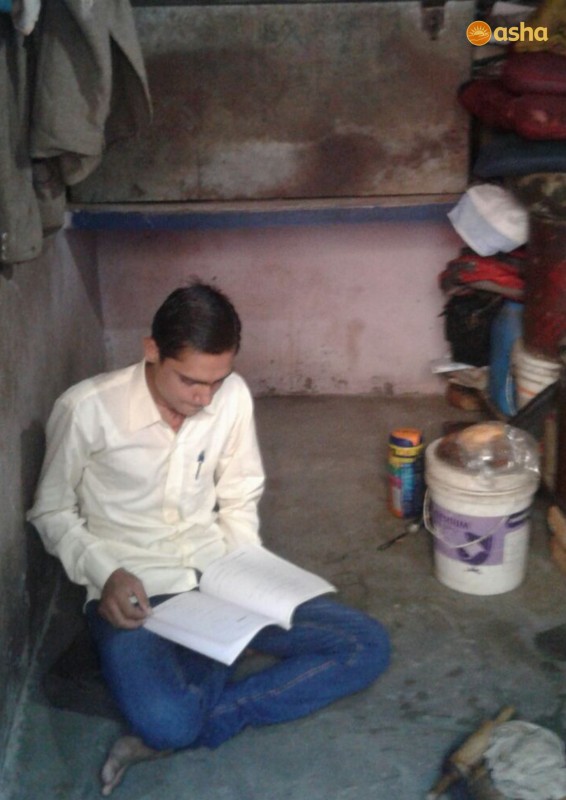 With the help of academic support, counselling and guidance of the Asha team, Santosh scored good marks in his high school National board exams. Seeing Santosh’s hard work, dedication, and focus, Dr Kiran decided to take him under her wings and mentor him. She had discussions with him and realised that he really had no idea about his options for the future. He was about to enrol in a Botany Honors programme at Delhi University. As she counselled him, it became clear that if she helped him all along, he could make efforts to begin the journey of appearing for engineering entrance exams. These exams are extremely competitive, and the success rate is really low. Dr Kiran gave him the financial support to enrol at a famous private coaching centre.

This was the turning point of his life. He prepared hard for the engineering entrance exams. At long last, he secured a seat at the renowned Delhi Technical University in their most competitive Computer Science Engineering Programme. What a fantastic outcome! There was celebration and joy all around! 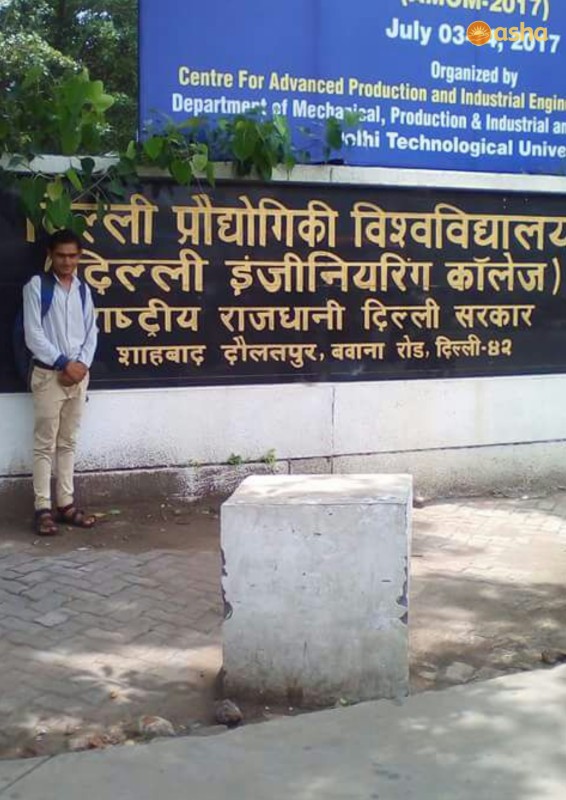 Dr Kiran realised that he would never be able to study at home. She arranged and paid for his expensive hostel accommodation at the university. This was for the first time Santosh left home and began to stay in boarding and lodging facilities.

Although Santosh was a good student, he had major health issues that affected his progress. These health issues were identified by Dr Kiran. She arranged for his treatment through her network of friends from her medical school days. The treatment lasted for over 2 years. She carefully monitored it, and ensured that all his investigations were done regularly at Asha as well as at the public hospital.

Asha also provided him balanced and nutritious diet which was equally important for his recovery because he was unable to afford it due to the poor financial situation of his family. Santosh recovered fully from his serious health problems after a long course of treatment and care. Without Dr Kiran’s intervention, his health could have deteriorated greatly.

Along with his incredible academic journey, Asha provided Santosh with the best Internship opportunities in top-notch multinationals like SMEC, Macquarie and Rio Tinto where he learnt professional skills in the best multicultural workplace environment along with learning business etiquette and how to conduct himself in a competitive environment. This not only gave him the cutting edge to his solid academic foundation but proved to be a game-changer during his final campus placement. 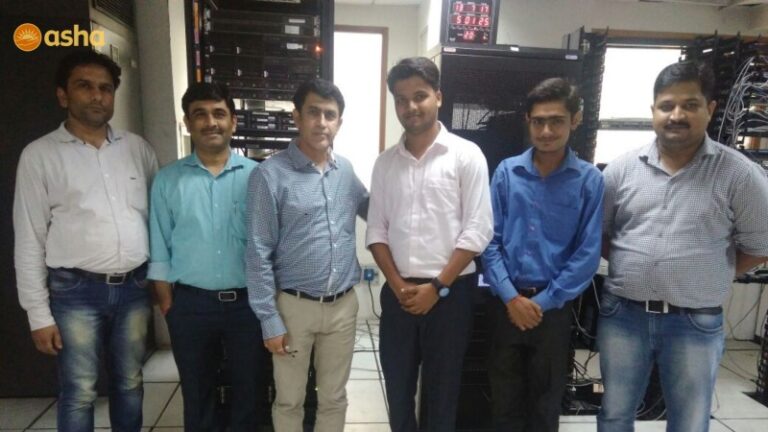 Asha also recommended Santosh for the Future Research Talent (FRT) award at the prestigious Australian National University. He was awarded the scholarship, and that was such a wonderful achievement! Unfortunately, due to Covid, it got cancelled. 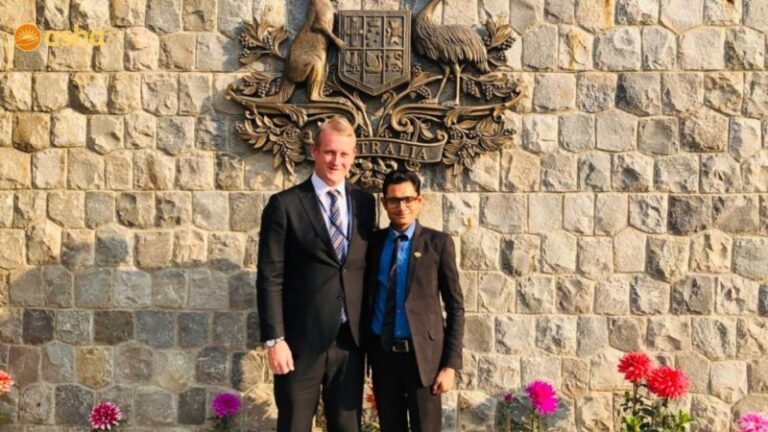 In Feb 2021 Asha provided him with an opportunity to get to learn English from Dr Richard Hogben, Trustee and National Coordinator of Friends of Asha Great Britain. These lessons significantly improved his English speaking and writing skills. Dr Hogben took great pains to teach him every week, and he also took much interest in Santosh’s life.

During the pandemic, Santosh worked as an active Asha Corona warrior helping in Asha’s Emergency Covid Response like spreading awareness, compliance with Covid appropriate behaviour, distribution of mask and sanitizers, and the food support programme. He helped many in his community to receive the Covid vaccine. As his father lost his income during the pandemic and the consequent lockdown, Asha provided his family with food and medical support during this terrible crisis.

Santosh was in the final semester of his computer science engineering programme when the pandemic struck. Students were asked to leave the hostel and study online from their homes. Santosh did not have access to good internet in the slum. When Dr Kiran got to know about it, she arranged for a high-speed internet connection at his place so that he could complete his crucial final semester without any disruption. 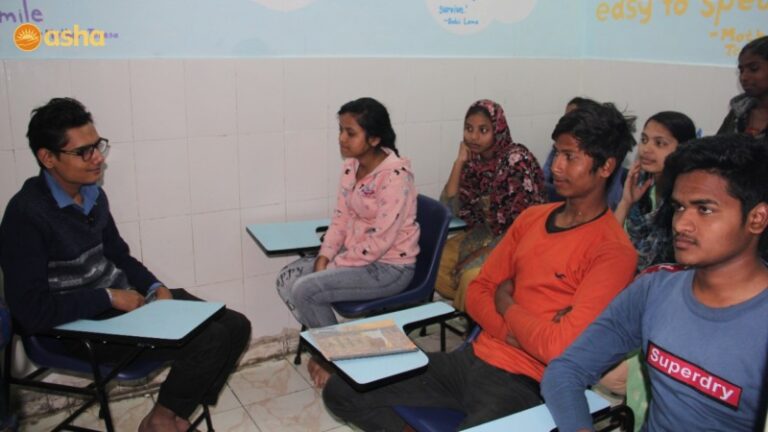 Finally, Santosh’s dedication and perseverance have paid off, and today he is a Technical Analyst at one of the largest global investment banks and financial services corporates. He earns a good salary, and has moved out with his family from Zakhira slum to a neighbourhood in the vicinity.

Santosh’s story is such a powerful example of Dr Kiran’s vision to never allow poverty to become a barrier to the dreams of the poor children from the slums. She is as passionate as ever, and she continues to work hard with the slum children in the hope that each child will be able to arrive at their fullest potential in life, and carry her vision forward by living the Asha values and helping other young people on their journey.