Asha, a Lifeline for Rajkumari, a Paralytic Patient

Rajkumari, 70 years old, widow, lives in Kalkaji Slum. She originally belonged to a small village in the state of Uttar Pradesh. Her parents, landless farmers, were forced to marry her when she was only fourteen. The young couple shifted to Delhi a year after marriage for a better life. As they were less educated and very poor to find reasonable accommodation and better jobs, they started living on a small piece of land in the Kalkaji slum, putting up a tiny plastic-roofed and walled shanty. They suffered a lot during the initial days without having sufficient food. Although after few months, her husband got a job in a textile factory where he did cloth dyeing, his income was insufficient to meet both ends meet. The couple was blessed with four children: two girls and two boys. One of the girls died due to childhood ailments. The couple raised their children with incredible difficulty. Their children grew up roaming around the slums having nothing much to fill their stomachs and not attending schools as there were no schools nearby or anyone to motivate them. They married their daughter at a very young to a man in their hometown, making her also a victim of early marriage. The two sons also married young and continued living in the Kalkaji slum.

Rajkumari started her association with Asha in 1991 when Asha began a clinic in Kalkaji Slum. She was then engaged in looking after the pregnant ladies and attending home deliveries as she had learnt a few skills from one of her aunts, a birth attendant in her hometown. As Asha Health Team identified her doing the work, they selected her to attend the Dai (birth attendant) training along with other ladies from different Asha slums conducted by the Government of Delhi. The training helped her to sharpen her skills and boost her confidence.

Her leadership qualities, friendly nature, and affinity for doing the work without minding the time made her the most wanted birth attendant in her slum. She was so helpful to the Asha health team in identifying high-risk pregnancies, the number of ladies pregnant in the slum, reaching the newborns with timely vaccinations, and post-natal care to the mothers. The residents were always free of tension in obtaining the newborns’ birth certificates, as Rajkumari was always ready to accompany them to the concerned offices. She served many pregnant women in the slum like a mother.

As time passed by Rajkumari lost her husband and one of her sons left home to live close by. The other son started drinking heavily. With age and family situation, Rajkumari developed diabetes and hypertension and all her treatment was done at Asha. Asha was taking care of her health needs and she used to attend the Asha Geriatric clinics regularly. She was doing well until she had a sudden paralytic attack 10 months ago. It happened during the early morning of a cold day as she took a bath after attending a late-night delivery. She was hospitalized for some days. Asha’s Health team rushed to take care her as her two sons were not taking care of her. Once she was discharged and confined to her bed, she moved into a stage of depression. She also suffers from memory loss and tends to cry very often as she finds it difficult to speak and express her needs.

Asha’s health team and her two daughters-in-law have continued their efforts to support Rajkumari to cope with the sudden change in her life. The young Asha ambassadors visit her frequently to cheer her up by spending quality time with her, clipping her nails, combing her hair, feeding, and massaging her hands and legs. The Asha Health Team also visits her weekly to check her health status and ensures that she does not skip medication and has food on time.

Rajkumari is indebted to Asha for the support she has received to cope with life’s current suffering. 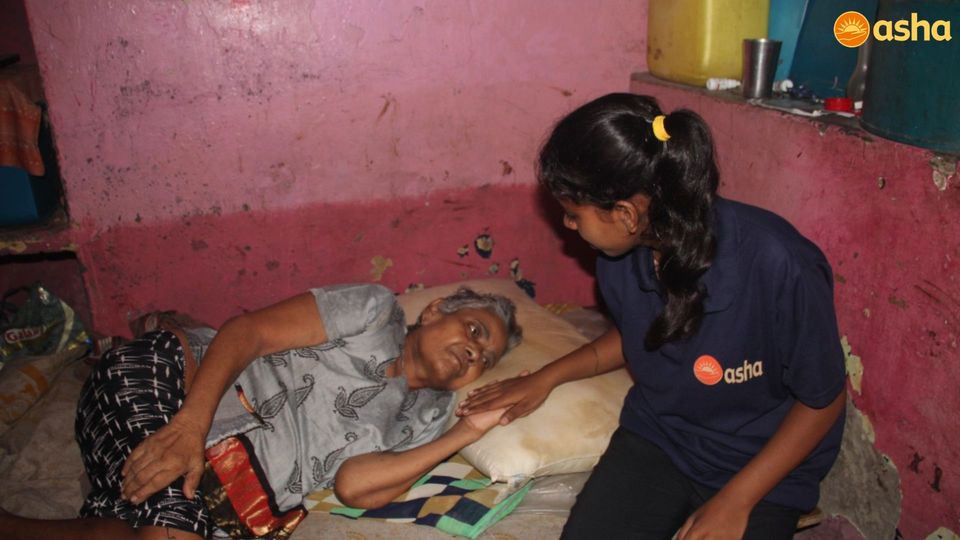 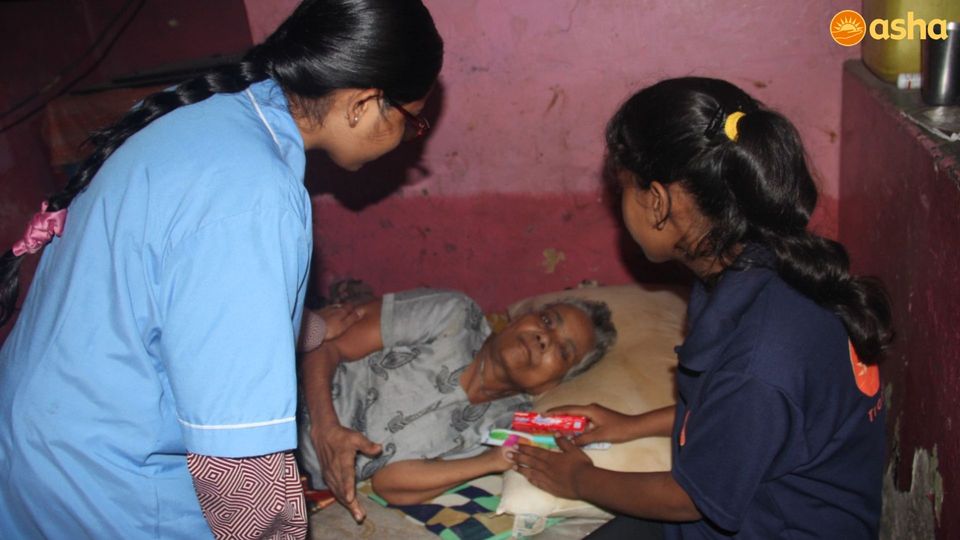